If you follow Robert Sapolsky, Hans Selye, and/or Ray Peat Ph.D., you will know that excess stress can drop you faster than Tyson did Spinks, without the luxury of getting back up. If you would like to know how dangerous stress truly is, look up the works of those men.

But today, I’ll show you 2 natural champion-level substances that have a mountain of research praising their usefulness for whoopin’ stress’s ass. Keep in mind, these nootropics profiles are for fun. I’m not a guru nor infallible. Think for yourself and come to your own conclusions. 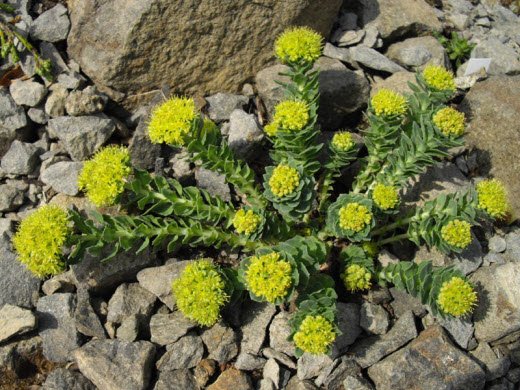 Also known as golden root, roseroot, Arctic root, King’s crown and many other names. You won’t hear of a better herb with more street rep, except maybe Panax Ginseng. Second best just means it works harder. To say it’s a super herb would be an understatement.

It grows and thrives at high altitudes in multiple cold regions such as the Arctic, the Alps, Scandinavia, and Iceland. The plant itself is a bad motherf**ker. If you want to be among the ranks of the best, get you some.

“[…] Rhodiola appears to be highly reliable in reducing fatigue symptoms and improving symptoms of stress (and secondary to that, well-being) in persons fatigued from non-exercise related stressors.”

“[…] Rhodiola appears to be able to significantly reduce the effects of prolonged and minor physical exhaustion that results in fatigue. This is more related to stress and the ‘burnout’ effect, or prolonged but low intensity physical exercise.”5

Take a break because there are still more mind-blowing benefits. I spent 20 hours reading and compiling info for this post.

F**k it, here are more benefits, courtesy of Examine.com if Viking usage didn’t convince you:

Benefits for days, ya heard me? Taking this stuff just might give you the strength and ferocity of the Vikings. Praise Odin and pop some Rhodiola.

If yo wig ain’t blown back by those benefits…you silly right now.

How It Works and What It Does:

If you are stressed out and/or fatigued, this should be in your top 3 go-to supplements. If you are an athlete, or work a job where mental performance is crucial under pressure, you want Rhodiola. There is overwhelming evidence for fatigue mitigation and prevention, subjective well-being, and cognition. Examine.com give it an “A” in the former and a “B” in latter two.

Geeked out explanation: It stimulates AMPK enzymes. more amounts of AMPK or more active AMPK increases mitochondria. This suggests increased metabolic function and higher energy levels which would contribute to RR’s ability to increase endurance and decrease fatigue8,9 Most of the effects come from phosphorylating (i.e. activating) the AMPK enzyme just mentioned by salidroside, a compound in RR. AMPK, according to Wikipedia is a “metabolic master switch.” Oddly, salidroside mimics insulin by stimulating glucose uptake, so it may act as a glucose disposal agent as well8.

All these benefits are obtained mainly from the compounds salidroside, tyrosol, and to a lesser extent, rosavin20.

These dosages refer to rhodiola extracts with a standardization of 3% salidroside. Be sure to look for that percentage or higher, otherwise don’t waste your money. Rosavins aren’t very “nootropically” active.

50mg: has been seen effective for daily fatigue prevention5
288–680 mg: for acute fatigue and anti-stress benefits5

Taking a dosage higher than 680mg will probably not work, as the effective of dosage seems to have a bell-shaped curve5. RR is slightly stimulatory and any negative side effects tend to be noticed when taking total daily dosages outside the “research-proven” dosages.

Human trials noted no side effects that were “clinically relevant”5,21

1. Noticed was a significant decrease in fatigue while in a moderately severe calorie deficit.
2. Noticed a decrease in fatigue when strength training and I could get a few more reps in on body weight squats and push ups.
3. Noticed that I didn’t “gas” as easily when running or sprinting. The reduction in fatigue gave me a boost in energy without any “crash” afterwards.

I last supplemented with it for 3 months and about to order some more soon.

I took half a capsule per day. Should last 6 months at that dosage. It has nothing else in the capsule except Rho.

24 July 2014 update: Ceretropic.com has a “Super Rhodiola” that I can’t wait to try. It’s an extract of Rho’s main active ingredients salidroside and tyrosol.

Note: what matters the most is the standardization of the salidroside and rosavin, but Eclectic Institute. Both pills and powder forms of Rhodiola can be found.

I’ve already talked about L-Theanine briefly and mentioned it as a top nootropic for beginners. 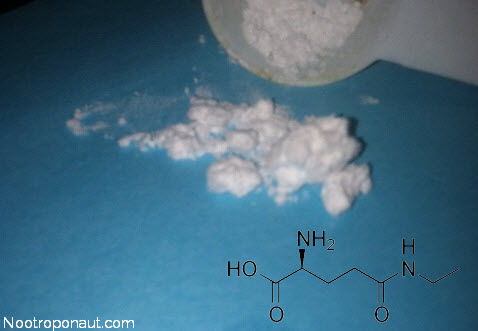 L-theanine, an amino acid, was discovered in 1949 in green tea leaves by Japanese scientists. In 1964, it got the “unlimited use” pass for all foods except infant foods in Japan. It is probably the safest of the safest nootropics. It is similar in structure to, and affects the body much like, the neurotransmitter GABA.

As far as I know, it’s only found in 3 things: green tea, black tea, and oddly also in the edible Boletus badius mushroom23.

4 more from the Suntheanine manufacturer22:

How It Works and What It Does:

Believed to increase GABA once it crosses the blood-brain barrier. GABA is a neurotransmitter that performs “downer” and relaxation functions. I would guess they (GABA and L-thea) up-regulates things that activate the parasympathetic nervous system or down-regulate mechanisms that control the sympathethic nervous system.

50–250 mg: this range increases alpha brain waves (i.e. relaxation)29,31
200mg: At a 1:1 ratio with caffeine (200mg each) it forms a synergistic chemistry that improves cognition and attention30

Dosages as high as 400mg/day have been taken safely35.

Incredibly safe at high doses. No harmful side effects have been observed. In other words, safe as shit:

However, if you are on chemo:

“Theanine also inhibits the efflux of chemotherapeutic agents, such as doxorubicin, idarubicin, cisplatin, and irinotecan, causing them to accumulate in tumor cells.”28

As far as I can tell, the only way to know that you are getting purely L-Theanine is to buy products containing Suntheanine®. An API-MS (atmospheric pressure ionization mass spectrometry) analysis was done and confirmed it to be L-theanine (>99%) according to it’s manufacturer (Taiyo International, Inc.)22. This study27 seems to agree:

Figure 5 shows the results for the SunTheanine[…] product as compared with the L-theanine standard. This was the only commercially available product tested which showed no substantial amount of D-theanine

The other active enantiomer, D-theanine doesn’t seem to perform the same functions as L-theanine34. If you get it from drinking tea, you are mostly getting L. When you buy synthesized stuff, unless it’s Suntheanine, you’re getting some D- enantiomer and sometimes in large amounts27.

I prefer Nootropics Depot’s L-theanine capsules because they work for me.

I’ll update you when I get a Suntheanine brand product so I can compare.

If you know you’ll be experiencing anxiety…200mg sublingually 50-60 minutes before the event should be helpful.

Thrive in freedom with strength,
Nootroponaut