In a hurry? See the blue box and vendor’s table immediately below

The 3 most important things to look for and consider when buying:

1. Quality control via testing (in-house or 3rd-party + organoleptic): It’s #1 because it isn’t regulated in the US and this means a company can sell you random non-descript powders and try to pass it off as quality. Or they “cut” their supply so it’s cheaper to sell. Look for HPLC, Assay, heavy metal, and/or organoleptic testing.

2. Reputation: You’ll hear different things, but if the company isn’t listed below (also I may not know about them)…I wouldn’t buy from them. Do your own searching, but if you dig as long as I did (I put 17+ hours into this post), you’ll probably come to the same conclusion. Look for real reviews of the product and the company.

The vendors below all have great reviews, stringent testing (via Certificates of Analysis, HPLC, etc.), and rest assured they won’t swindle you

Pills/capsule form is great because you don’t have to weigh anything (or eyeball the scoops, which is stupid, and gambling with your life). I’ll say it again below, but GET A SCALE if you’re buying powder!

All prices subject to change and are pre-shipping prices. Prices and all data in table last updated: January 2019. By the way, HCl stands for Hydrogen Chloride. FAA stands for free amino acid. HCl vs FAA form is described further below.

My favorite nootropic vendor. Mainly because they read the research and provide effective products in a safe manner; has other novel products worth checking out as well. Cares about their customers without letting money negatively influence their business decisions.

Heard nothing but good things about their PB. Potent stuff. Click the button for a 15% discount, click “Take me to the store,” and then search for “phenibut” and enjoy your 15% discount.

My trusted and extensively-researched ones. They’re the same as above, in an easy-to-compare format with extra information. Price column is based on the lowest size offering I could find.

Phenibut is a nootropic-like, GABA-derived substance that can cross the blood-brain barrier (due to the phenyl ring) and acts mainly as an agonist on GABA-B receptors. GABA is a calming hormone and main inhibitory neurotransmitter that depresses the Central Nervous System. Excessive neuronal firing of the CNS is associated with anxiety and other “Flight, fight, or freeze” responses. GABA (and thus Phenibut) steps in to depress, i.e. control and counteract CNS over-stimulation. That’s how it works it’s magic.

It was developed for Russian astronauts (in the 1960s) to remain calm under pressure without taking a hit to their mental performance or focus.

Helps you relax, calms emotions. May calm you down by reducing stress and an overstimulated nervous system (does this by acting on GABA-B receptors). Because of this many notice a great mood boost, little to no feelings of anxiousness, and deeper sleep.

Please read the warning section below

This article, like all my articles, is subject to this Site’s medical disclaimer. This article is in NO WAY medical advice nor approved by the FDA. I’m not a doctor. Talk with your doctor before taking anything, especially if you’re on medications. Some links below to vendors/products are affiliate links. If you decide to buy after clicking one, I may receive a commission. This comes out of the vendor’s pocket at NO charge to you.

The above is from Noofen leaflet on reddit’s r/phenibut sidebar (Scribd.com PDF)

I’ve never taken Benzos, but people who have say it feels like low dose Benzos without the whole “losing your motivation,” brain fog, or forgetfulness that comes with them.

Some say it feels like low dose MDMA (especially when they combined it with a tiny bit of caffeine). 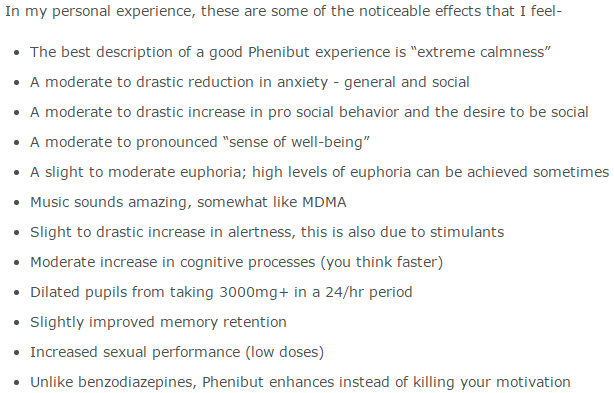 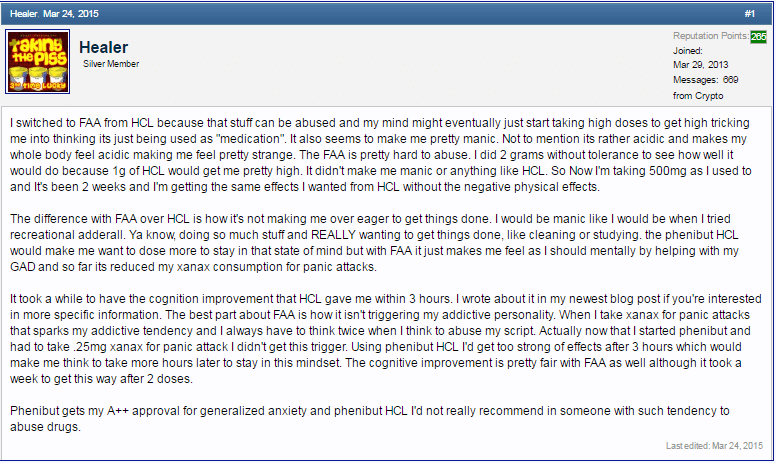 Is it legal or unregulated?

United States (US): As of June 2018: Not regulated. Uncontrolled. Legal to possess. Not intended for human consumption. All that according to Erowid’s phenibut page.

I must caution you however: I’m not a lawyer, have no legal training, and can’t guarantee what I’ve stated is accurate because laws are complex, always in flux, and can differ from one country/state/county to another. You gotta do your own due diligence, as always.

FAA is the pure “free-existing amino acid” version. 99.5% pure product with nothing else added. The HCl version is made by adding Hydrochloric acid to Phenibut FAA.

Get you some FAA or HCl here

Dangers, Side Effects, Warnings, and How to Store it

–DO NOT use if pregnant or breastfeeding.

–DO NOT use with Alcohol, sedatives, opioids, other depressants, or any other things that affect GABA (like Benzodiazepines, Xanax, Valium, Klonopin, Baicalin, Barbiturates, GABA itself, Kava, Picamilon, Valerian, Magnolia Bark Extract, Baclofen, and many more.) Why? Because GABA and GABAergic comounds depress the Central Nervous system. Mixing them intensifies this effect too much and can cause respiratory depression (i.e. slow breathing and heart rate like an opioid overdose) that can be fatal.

–People who’ve used it with alcohol (don’t do that by the way) say that one shot feels like 2 and 3 drinks feel like 7. That’s a dangerous combo and you can black out sooner than you normally would (or black out even if you normally don’t). And if someone calls an ambulance for you…now you got medical debt because you’re footing the bill.

–DO NOT drive or use any machinery while on it

–If you have gastric and/or duodenal ulcers, consult your doctor

–Tolerance builds quick on this stuff.

–Anecdotally, it takes like 2-5 hours for it to really kick. So…DO NOT pull a “weed edible rookie” stunt by thinking it’s not working and then take too much… 1. because you’re not Joey “CoCo” Diaz and 2. you might end up with the groundhog as your mailman [aka dead].

–It’s easy to get addicted to and dependent on this stuff (just like drugs and alcohol) when misused.

You can avoid most side effects, addiction, and tolerance by *ONLY* taking it 1-2 days every 7 days, but NOT on consecutive days with AT LEAST 3 preferably 4 days in between time you use it.

–Stopping cold turkey (especially if you have been taking too much or haven’t been taking it in the safe way I recommended) can result in some bad withdrawals. Withdrawal symptoms can be anything from depression, negative thoughts, panic attacks, and stuff like this or… Like this guy who was having withdrawal-like symptoms (panic attack and anxiety) return *months* after he quit using it after being addicted to it.

(barring any math errors on my part): If we take the rat LD50 [Lethal Dosage] of 700 mg/kg i.p., the Human equivalent dose (HED) would be 113.51 mg/kg for the LD50. Now, I’m NOT a scientist, doctor, or mathematician, so do your own calculations to be sure, but mine were based on the Reagan-Shaw preferred formula here

Crazy thing is, I’ve heard of people taking 10 grams and surviving, but don’t gamble with your life like that over some silly powder/pills.

Using Bayesian Bodybuilding’s dose calculator here, you can estimate at what dose your addiction/tolerance would most likely start *and* pre-workout dosage! Read his article and you’ll see that phenibut could help you with those gains too.

–Prolonged or extended use can cause hepatotoxicity (liver toxicity)

–Can cause sweating, gut issues, lethargy, dizziness, slightly impaired memory, nausea, and/or somnolence (aka sleepiness or drowsiness… especially if you overdose.). This is common with most GABA agonists [ref].

–Prolonged use can cause some awful withdrawal symptoms similar to alcoholic withdrawal. That’s why it’s not a good idea to use this stuff more than 2 times / week with 3-4 days in between uses. You’ll see this referred to as a “wash-out” period a lot online. For other terrible side effects and withdrawals, just google “horrible phenibut side effects” or check out the warning on reddit’s r/phenibut’s sidebar.

TL;DR = Don’t use this stuff if you’re on *ANY* kind of medication unless you’ve talked to your Doctor about it and he/she approved. Don’t use more than two times per week

–Store in a cool, dry place away from light or moisture. Store under 25 degrees Celsius (77 degrees F).

–Keep it away from children (Obvious I hope haha)

–Don’t use after the expiration date.

If using powder, buy a scale (NO exceptions!) that accurately measures to at least 0.01 of a gram. You don’t want to feel the wrath of too much.

–LiftMode.com blog recommends 250 mg – 350 mg 2-3 times per day for a lower dose for a calming effect. Their higher dose is 500 mg – 750 mg up to twice daily for less sleeplessness, along with the effects noticed at the smaller dosages. Their actual packaging however recommends taking “1-2 servings [300 mg = 1 serving] 1-2 times per day.”

How to take it

Always consult your doctor before trying anything, especially if you take any medications.

It’s absorbed better on an empty stomach. Why? Well, since it’s acidic, an acidic environment will allow it to be better absorbed. That means, avoid taking it with food since eating decreases the stomach’s acidity for a bit.

HCl or FAA Powder:
–Hardcore: Weigh dose, mix in water, and drink with no chaser.
–Chaser: Same as above but chase with a sweet drink like apple juice or something to combat the bitterness.
–GLL Method: Same as hardcore except you mix to with green tea

Because the HCl version is very acidic, over time it may harm your teeth. Mixing it in water should buffer the acidity somewhat. Swish with a bit of extra water, or go for the pill version.

With all of the above: be sure you always properly weigh the dose, take it on an empty stomach, and wait at least 3 hours before taking another dose and declaring it doesn’t work because if you have any tolerance to other GABAergics (like those mentioned in the Warning sub-section above), you probably won’t notice anything.

For a manufacturer’s recommendation on how to take it, again see here

Side note: I’d strongly recommend against snorting this stuff.

If you need something to help you calm your emotions and relax (Phenibut may support reducing feelings of social anxiousness), and support occasional sleeplessness, maybe it’s right for you.

But let me warn you, in the United States, Phenibut isn’t regulated so that’s why it can be sold legally…for now. Anything that works great, but has the potential for abuse/addiction, the government usually cracks down on it sooner rather than later (remember DMAA?).

So get you some

PS: If you want a more natural alternative, I really like Sensoril Ashwagandha. (I’ll link to my Ashwagandha stress post when I write. until then, see my Nootropics for anxiety and stress post on Ashwagandha)

PPS: Want to buy non-phenibut anti-anxiety nootropics? Here’s my list of the best nootropic vendors to get them